We were delighted when we learned that Texas thriller writer Taylor Moore had made Still Austin’s “The Musician” the go-to whiskey for the leading man in his debut novel, Down Range. So we got in touch with Taylor, and he jumped at the chance to answer our Seven Questions. Taylor is a sixth-generation Texan who grew up on a farm and ranch northwest of Houston. He is a former CIA Intelligence Officer who worked in both analysis and operations and later consulted for the Department of Defense in Theater Security Cooperation, Force Protection, and Counternarcotics. He now lives in the Texas Panhandle with his wife and two children, where he is a full-time author, screenwriter, and speaker. 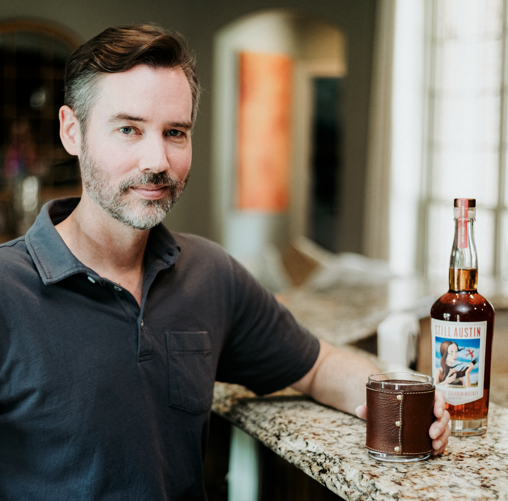 Music has always been an important part of my process. On the way to the local coffee house where I write, I’m either psyching myself up for a gunfight or getting into the right state of mind for crafting dialogue, which means there’s usually some Sturgill Simpson, Lyle Lovett, or Gregory Alan Isakov playing on the trip over.

2. Tell us about a book or work of art you feel is woefully misunderstood or underappreciated.

While Syriana was critically acclaimed, it’s gotten a bad rap from some viewers, who I’ve heard describe it as boring and confusing. But that film, based on CIA operations officer Bob Baer’s memoir See No Evil, is probably as close as it gets to an actual depiction of the spy world. Aside from that, there are a few terrific verbal exchanges between characters, only to be rivaled by my other all-time favorite movies, No Country for Old Men and There Will Be Blood.

3. Besides the obvious knowledge about guns and government, how did your time in the CIA inform your work as a writer?

It all comes down to atmospherics. A lot of what’s in the book can be learned through research, but to set a realistic tone and write true-to-life dialogue, it helps to have been there and done it. I do my best to bring readers into that world and let them walk a mile in the shoes of intelligence officers and law enforcement.

4. You’re from Central Texas, but you now make your home in the Panhandle—where your book series is set. What’s special about Northwest Texas, that made you want to live there and write about it?

Moving to the Panhandle was like being granted access to a time machine. Many of the people who live there have the same grit as the ones who settled it. And so much of the Texas High Plains and Llano Estacado still looks and feels like the Old West. For a writer fascinated with the history and stories of that period, there is no better place to live, and certainly no better place to set a novel series.

5. Finishing a novel isn’t easy. How did you manage to get through the first draft and the long revision process?

Nothing about writing a novel is for the faint of heart. From conception to publication, Down Range took about three years. I got through the long and sometimes grueling revision process with a lot of moral support from my wonderful family—and a little help from Still Austin Whiskey.

6. Are you working on book two? When will we get to read it?

Book two is in my editor’s hands, and I’m about to start working on book three. The follow up to Down Range will be released next summer.

If I’m being honest, I’ll take it any way I can get it. For happy hour at home, I drink it over ice. But if I’m out at a bar, I can’t turn down an Old Fashioned.