Tim Doyle has produced art for clients such as Marvel, Dark Horse, Cartoon Network, and Studio Canal. Doyle also art directs poster series for bands such as Metallica, Failure, and “Weird Al” Yankovic. He lives and works in Austin along with his wife and two children, a really stupid cat, and Bernie Wrightson’s dog. 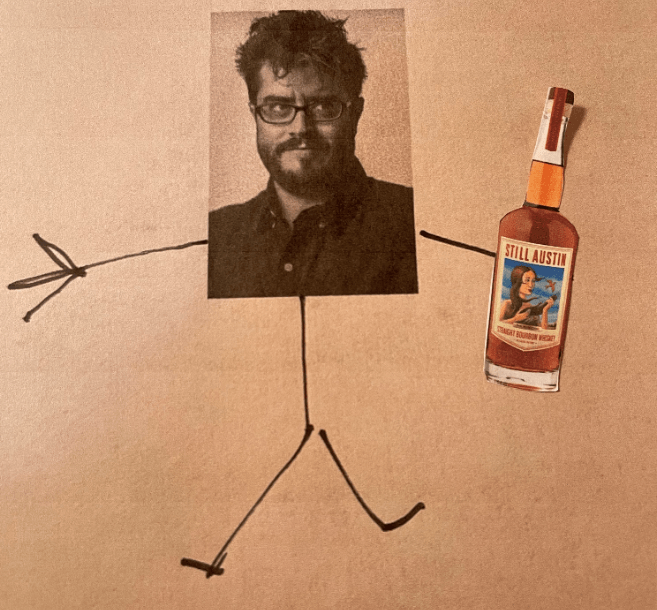 Oh, man. I’m really into anything that subverts expectations. Artwork that plays with the form of what it’s intended to be. Not illustration, but something like Twin Peaks season 3, where it gave the audience nothing of what they expected, but everything they needed. I watch a lot of movies (obviously) and read a lot of comic books, and when those mediums are at their best- they can set my brain on fire. When it comes to visual art though, I really enjoy the French artist Moebius, and others inspired by him, like Geof Darrow.

Babe 2: Pig in the City is a flawless cinematic masterpiece, and if you haven’t seen it, you have no idea what I’m talking about. Titanic won Best Picture that year, and it’s only because nobody takes a talking pig seriously. Titanic isn’t fit to clean Babe’s stall.

3. When you did the 3D label for our Double Barrel bourbon, you proved your skill at depicting an old-school sci-fi vibe. Tell us about how you fell in love with science fiction.

Sci-Fi has always been my jam. I do love a good creature design. I think seeing TRON as a five-year-old in 1982 really popped the cork on my brain, and then I followed that up closely with 2001: A Space Odyssey on home video, and then Star Trek on TV…that all did the trick. And obviously, comic books have been a lifelong constant.

4. What would you tell someone who’s maybe working a job they don’t love, but secretly dreams of being an artist?

If you draw or paint something, boom, you’re an artist. Nobody will ever give you permission to be an artist, because you don’t need permission. It’s not like being a doctor. There’s no test, no licensing board. You don’t need classes or an education to do it—unless you WANT to do that. Just get the tools, make the art, done. You’re an artist. Want to make money at it? Learn to hustle. And you will never stop hustling. That’s the secret.

5. What do you think is one of the major misconceptions about art or the art world?

I think there’s an issue that anything an artist does is “easy.” Like … this is work. This is hard work. It can be fun, and rewarding, and challenging, but I had a lot more mental space and free time when I sacked groceries for a living.

Finishing up a book cover, about to start another one, launching a Kickstarter for one of the artists I work with, overseeing the Nakatomi print shop I own with my wife (that one’s easy, because my staff is rad). Mostly waiting for the concert tours to start back up, as they’re usually our main clients!